Above: Magickally Empowered Artwork of Zagan By G.A.R.

Zagan is a fearsome warrior, vampyre, and wanderer who rips open the Veil every time he is summoned. On the spectrum of dark to light, Zagan is a dark spirit. He devours the enemies of the Qliphoth and destroys those who seek to impose boundaries on those who would self-identify as “Left Hand Path.” If you take his enemies as your enemies, you will have his protection.

According to one of my guides, Zagan offers the wisdom found in “the deepest tombs and the darkest depths.” Zagan comes to those who pursue gnosis of the Infernal Divine and those of us who require the assistance of demons to fulfill their paths in life.

Above: Channeled Sigil of Zagan

Zagan is a great spirit to work with in pursuit of chakra dissolution and physical strength. He has aptitudes for shielding, warding, apotheosis, banishing, exorcism, malediction, spider magick, fateweaving, protection, and the construction of astral traps. He can help the witch create magickal booby traps that will cause curses cast upon her to backfire.

According to the GoetiaGuide by Sara Petrucelly, Zagan “likes to show you humor in everyday situations and helps you conquer fear,” and he can “show someone the error of their ways… [and] teach social skills.”

Augustus Grigori told me about an owl aspect of Zagan, which owl aspect comes bearing lances in its talons. This aspect of Zagan can teach the sorceress the art of astral combat and answer any question pertaining to combat. In my personal gnosis, Zagan also has a hyena aspect as well as an aspect like a drakaina (human above the waist; serpent below the waist).

Zagan is knowledgeable regarding esoteric and physical alchemy. He can make men wise and witty. He imparts knowledge of forms of sorcery which most will never obtain. He is only to be summoned with incense burning.

According to Crowley’s version of the Ars Goetia, Zagan “can turn wine into water, and blood into wine, also water into wine… [and] turn all metal into coin of the dominion that metal is of.” According to Petrucelly, Zagan can give wise guidance in the mangement and investment of money.

One spirit I channeled referred to Zagan as “the Black Wizard of the Depths,” “the Darksome God of Fire” (referring to the Black Light in this context), and “the Dark Spirit of Death.”

The spirit has appeared to me in three ways: (i) a anthropomorphic preying mantis, (ii) a grey anthropoid bearing a spear, and (iii) a grey anthropoid with a red head shaped like a three-dimensional cartoon flame. Crowley’s version of the Ars Goetia describes him manifesting as a bull with the wings of a gryphon, but adopting the shape of a human male later on.

There is a specific type of servitor which Zagan specializes in creating: a vampyric and feline protector which appear with fangs, a spotted orange coat, and a black mane. 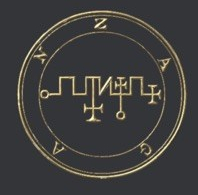 According to S. Conolly, Zagan can transform something into its opposite and help a magickian overcome an addiction or bad habit.

In the cypher I use for English Gematria, the names Zagan and Zagam both have a value of 11. This is the same value this cypher gives for the letters “LHP” as well as the word “Xul,” a name for the Black Light (which means it also corresponds to Lux). This value also corresponds to Daath/the Abyss as the eleventh sphere on the Tree of Death.

In Hebrew Gematria, the name Zagan has a value of 60, matching words meaning treasure (think of coin creation), treasury, light (compare to Xul & Lux), to wander, wandering (my guide specifically referred to Zagan as a “wanderer”), and to wail/lament (this relates to Goetia and the conjuration of death gods). 60 is also the value of Samekh (Hebrew letter, perhaps you’ve heard of Liber Samekh) and Nod (the land to which Cain fled after murdering able).

Above: Magickally Empowered Artwork of Zagan By G.A.R.