RAY-kuh-TOUR-UH-loth Yakathandra Yalatagora Rakoratagandra Yakalathoth Yalagor
Channeled Chant to Evoke or Invoke Semyaza. The first word is broken up into syllables. Syllables equivalent in sound to English words appear as those words in all caps.

Above: My Original Sigil for Semyaza

Being the person who created all these chants, I give everyone permission to use them for any reason in any context from a forum post to work published for profit without direct permission from me. While it is not necessary to give me credit (you won’t find me under your bed), it is a courtesy I would appreciate.

UPDATE: This article needed to be amended because the individual formerly known as Austin Blackstone/Ryan Stirner has publicly come out as a trans woman. She now goes by the name Raine Ahava and her dead names have been replaced. Further amending will be done at a later date for quality of writing– I wrote this quite a while ago and I didn’t write it well.

I first spoke publicly about Sanatas on YouTube in a pair of videos which I removed. Despite the fact that almost no black magickian can stand in his presence without going homicidally insane, several of my viewers managed to work with him and survive. Now I have been led to release my teachings about Sanatas to the public. It was Raine Ahava who originally channeled and told me of his existence. And yeah, this was a quick essay I put together speaking about myself in third person for some indefensible reason. Enjoy. 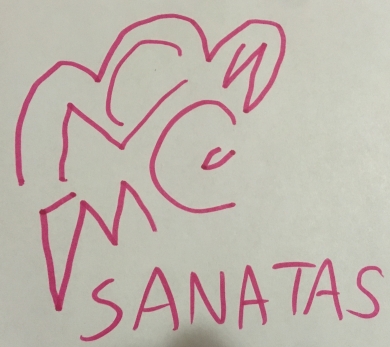 Above: Channeled Sigil of Sanatas

Sanatas presides over the innermost singularity of the Trans-Qliphothic labyrinth. He is a great destroyer—a divine and destructive archetype which predates all other archetypes. He is the One True King of Demons, and he leads the Infernal Divine through Sepheranz. He is the precursor to Samael, Satan, and Lucifer which Satan purportedly strives to emulate. His name, Sanatas, is the reversed spelling of Satanas, the Greek name for Satan (the Latin form is Satana). Until V.K. Jehannum evoked Sanatas in 2018, one-thousand-and-seven-hundred years passed without any magickian summoning Sanatas without going insane or killing themselves as result of the endeavor. According to Sepheranz, many who tried did “unending horrible things” because they simply could not restrain themselves.

Based on what I understand from communing with fellow Occultists, Sanatas appears to have manifested himself to others during this 1,700 year time period. It would seem that summoning the spirit in and of itself is the deadly thing. When you summon a being, you use your own energy to manifest them. Perhaps it is this task that drives men mad, but seek guidance unless my hypothesis is wrong.

Sanatas is the master of voice disguise. When he fully possesses a person, he can speak in their normal voice, such that his control of the vessel is difficult for outsiders to discern. Otherwise, I find his voice quite deep and sophisticated, albeit so deep that the sophistication can he hard to detect.

Sepheranz told me to only call upon Sanatas after consulting her. With her approval, and thus, her blessing, Sanatas would appear to me and grant my request. Sanatas can accept or deny your evocation, as can any deity. If it’s not the right time for him or you, he will let you know. If the time is right, he will appear, again, with Sepheranz’ blessing. Do not withdraw after conjuring him. Should the magickian feel shame, doubt, or fear in approach Sanatas, he will be angered and depart, and he will hold a grudge, and he will refuse to appear to the magickian for a given period of time.

When a soul comes by sufficient spiritual attainment, it is Sanatas which separates them from the causal universe and the cycle of reincarnation. This is what the Black Lodge somewhat inaccurately refers to as “self-deification.”

Sanatas is to be conjured for the destruction of one’s enemies: whether they be a formidable threat or simply a nuiscance. He is not to be conjured for petty squabbles between coworkers. Do not speak to him with words, for he can read your heart, and he may see one thing where you say another. He many refuse to provide or even engender the reverse of whatever was asked of him. So, speak with your soul and your gnosis instead.

Sanatas swears that this world or universe (?) will be purged and renewed with the fires of his destruction.

It may or may not be a coincidence that Sanatas, in Latin, is a feminine plural accusative conjugation of a word meaning healed, cured, restored, repaired, or corrected. Here is my source for that:
https://en.wiktionary.org/wiki/sanatus#Latin

Sanatas can appear as it, he, she, etc. He appears to Austin Blackstone as a swarm of bees and to V.K. as a large suit of armor, which is always black in visible astral manifestation, but varies in appearance in meditation journeys/visions. His secret names are Simmakhalla and Simmathal. Secret names are to only be used in ritual and never revealed to non-practitioners.