In my personal gnosis, there are five aspects of the Morrigan. These are Babd Catha, Macha, Anu, Nemain, and the metagod behind all four of them. When I say there is a Morrigan metagod, the metagod would be Nemain, Anu, Macha, and Babd Catha combined as one being, which one being is more than the sum of its parts. I was commissioned to channel a sigil which could be used to call forth any of the five aspects of the Morrigan, as well as provide a chant selection useful in conjuring the goddess(es).

Above: Channeled Sigil of the Morrigan

Concelebrate Morrígu Magnum Reginae
“I Praise Morrígu, Great Queen!”
This Chant Can Be Used to Call Upon Any Aspect of the Morrigan

Salve Morrígan Regina Phantasmata Decepturus
“Hail, Morrígan, Queen of Phantoms!”
This Chant Can Be Used to Call Upon Any Aspect of the Morrigan

Invoco Morrígan Numen Fati
“I Call Morrígan, Goddess of Fate!”
This Chant Can Be Used to Call Upon Any Aspect of the Morrigan

Voco Te Domina Proelia– Interveni Morrígan
“I Call You, Mistress of Battle– Come, Morrígan!”
This Chant Can Be Used to Call Upon Any Aspect of the Morrigan

This ritual, which I was commissioned to design, calls upon Ralasan and Abaddon to (i) liberate the celebrant from poverty consciousness, (ii) inspire her to have faith in herself, and (iii) induce a mental rejuvenation leading to motivation and inspiration. To be clear, the confidence, inspiration, and motivation yielded by the rite are all specifically for one’s pursuit of financial betterment. The instructions are simple enough, and completing the spell will take five (consecutive) nights.

On the first night, draw out the channeled sigil I have provided and perform the ritual to follow while staring at the sigil. On the second, third, fourth. and firth nights, blood the channeled sigil and meditate on it for around ten minutes (you are to both bleed and meditate on the sigil nightly, bleeding first and then meditating afterwards). On the fifth night, once you have blooded the sigil and then meditated on it, you are to either rip the sigil to pieces or burn it to ash. Thereafter, be confident in the success of the rite, and be assured that you now have what it takes.

Ya Namosh Sitra De-Smola Alogos Drakosophia Exat!
[In the Names of the Sinister Left Side, the Unwritten Gnosis, and the Underlying Force(s) of All Demon Magick, It Is So] 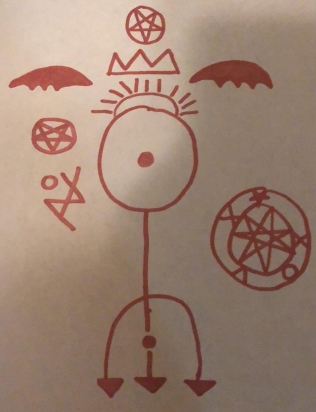 Above: Channeled Sigil to Accompany the Rite

This is a ritual I was commissioned to design. It calls upon Seere, Sitri, Barbatos, Stolas, Astaroth, Aphrodite, and Medusa to transform the celebrant in any way they see fit. While the celebrant may incorporate any sigils or magickal equipment at her disposal into this rite as she sees fit, my rituals are designed to generate extreme power and great results without any material accompaniment. Phrases which are meant to be chanted in a rhythmic monotone appear in italics, translations appear in brackets, and explanations appear in parentheses.

Ya Namosh Sitra De-Smola Alogos Drakosophia Exat!
[In the Names of the Sinister Left Side, the Unwritten Gnosis, and the Underlying Force(s) of All Demon Magick, It Is So]

In my personal gnosis, there are five aspects of the Morrigan. These are Babd Catha, Macha, Anu, Nemain, and the metagod behind all four of them. When I say there is a Morrigan metagod, the metagod would be Nemain, Anu, Macha, and Babd Catha combined as one being, which one being is more than the sum of its parts. I was commissioned to create an invocation of Macha as well as channel a sigil which could be used to call forth any of the five aspects of the Morrigan.

Above: Channeled Sigil of the Morrigan

Introduction to the Rite Which Follows

Like the rest of the rituals on this website, this invocation was designed to require no physical equipment to be successful. Any equipment that you can bring to the altar can be incorporated at your discretion, but the rite was designed to be powerful enough to yield significant results without it. Names in bold are meant to be vibrated, phrases in italics are meant to be chanted in a rhythmic monotone, translations appear in brackets, and explanations appear in parentheses.

I Call You Forth, Macha,
Goddess of Kingship,
And Sun of Womanfolk,
Dark Divinity of Horses,
Great Spirit of Fecundity,
Numinous Harbinger of Warfare,
Raven Woman,
I Call You Forth. 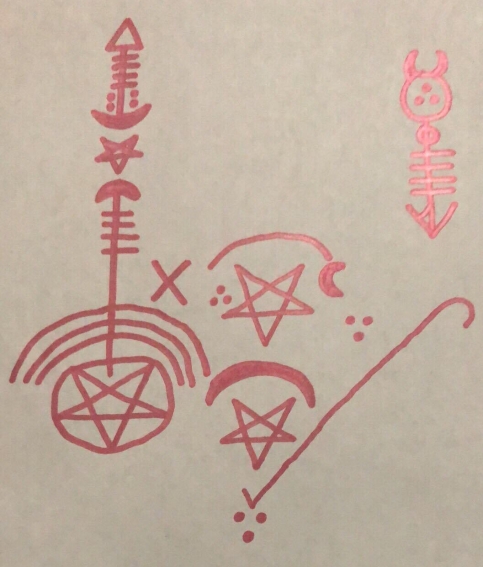 Above: Channeled Sigil of Aphrodite

The content of this article will focus entirely on my personal gnosis. Below the article appears a list of articles for recommended reading, some of which at least appear to contradict what I channeled. I was commissioned to write this article by a client. The table of correspondences above which I personally channeled may be incomplete– I do not choose what the spirits tell me.

My personal gnosis is that there is no distinction between the Goddess Aphrodite and the Goddess Venus. I preface with this because it is common for Greek deities and their Roman equivalents to be different aspects of one deific force, and the pair of aspects may or may not be functionally independent depending on the deific force behind them.

The teachings and auspices of Venus-Aphrodite are of use in cleansing, grounding, banishing, exorcism, the coercion and enslavement of spirits, binding spells, object consecration, protective magick, sex magick, lust magick, nature magick, the use of crystals, and the pursuit of working with water elementals. She can also give aid in the creation of unique protector-moneymaker egregores.

Above: Second Channeled Sigil of Aphrodite

Aphrodite works alongside entities which can be described as primordial and dark. She can help those who seek the darker aspects of the Numinous by granting them gnosis of the Black Light and initiating them through the elements. She can grant power of all kinds and knowledge of many varieties.

Aphrodite can transform the magickian’s personality, imparting charisma, charm, and talents for seduction and flirtation. She can help one create artistic expressions of love (for example, poetry) and give aid in love spells (I believe love spells should be used by consenting couples to intensify pre-existent love, not for romantic coercion). Aphrodite can guide the celebrant in courting the apple of her eye.

Aphrodite can make the sorceress powerful and wise. She can defend the magickian against both spiritual and physical attack, and help one come by quick money in particular and financial benefit in general.

Aphrodite has a bear aspect which is useful to call on for stellar magick, working with black holes, opening portals, and solar alchemy and magick. She also has an owl aspect which is a useful one to work with for soul readings, divination, scrying, and developing claircognizance and the ability to psychically locate missing objects. Her snake aspect is a destroyer aspect, and her fire aspect is apt for working with the Void.

Aphrodite’s dragon aspect is a hard one for me to get a read on, but it seems to be more of an underground/cavern dragon aspect than a primordial chaos dragon aspect. Her aspect as a goat mistress seems equally abstruse at the moment. It would be accurate to describe her snake and goat aspects as crone aspects, whereas Aphrodite the bear is more of a maiden aspect. She also has an aspect as a lunar maiden and a warrior aspect as a reaping/death figure.

As soon as I was commissioned to create this article, I knew that I was meant to work with Aphrodite myself in pursuit of my own glory, not just in pursuit of a check. I drew three Norse runes to discern what I was meant to gain from my partnership with the goddess. The first was Tiwaz, which signified that Aphrodite came to me to help me develop as a warrior (note: Aphrodite originated as a warrior-fertility goddess). The second was Dagaz, which rune signifies the completion of an initiatory process* whereby one’s inner warrior is revealed. The third rune, Ehwaz reversed, meant that the auspices of Aphrodite were going to help me correct my course after I pursued an initiatory pathworking that I shouldn’t have.

*This implies great aptitude for alchemy on Aphrodite’s part 🙂

Mozdaeur (mawz-DAY-er) + Zhizlal (zihz-lawl)
Two Channeled Secret Names of Aphrodite
(Secret Names Are Only for Use in Magick and Worship)
Try Focusing on One of the Chakras Aphrodite Specializes in Working with, Vibrating One of These Names Three or Five Times, and Thanking Venus-Aphrodite Afterwards. You Will Be Glad You Did.

This is an all-purposed magickal hymn which calls upon the power of Qalilitu and Lilith. It can be used as a stand-alone self-empowerment exercise or spell to get what you need, or it can be incorporated into whatever ritual you’re designing.

Translation: “I Call Mother Qalilitu/ Eternal Lady of Gamaliel/ Descend Unto Me, Daughter of (Name of Lilith Meaning Northerner)/ Hail Qalilitu and Mother Lilith/ Come, Goddesses of the Hidden Place/ I Praise Lady Qalilitu/ And I Praise Mother Lilith/ Praise the Ladies of Darkness/ Glory to Qalilitu and Lilith.”

Qalilitu is an aspect and daughter of Lilith whose existence was channeled by Daemon Barzai. My article about this spirit can be accessed via the following hyperlink:
https://vkjehannum.wordpress.com/2017/08/03/qalilitu/