Advenite Magnus Ab Rephaim Adiaphotos
“Come, Great Undead of Qayin/Adiaphotos!”
Calls Upon Qayin to Presence the Ghosts of Magickians Which Are Loyal to Him. This was made to manifest very quickly and easily so it could be used for magickal combat (especially self-defense), but it can also be used to presence a group of Qayin’s ghost magickians to participate in a given ritual or commune with the magickian. Saying it out loud breaks down any energetic resistance which is meant to keep your spirits from manifesting, and therefore Qayin (and you) can presence the ghosts. Source: V.K. 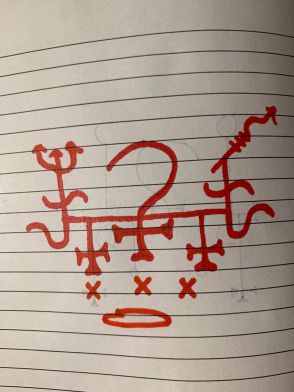 Above: Sigil of Cain’s Fire Aspect Channeled By Augustus Grigori

Qayin, Mahan, Diaphotos, Qabeel, Barekhooh
A chant to Qayin/Cain composed of various names for him, composed of thirteen syllables, the numerical value of the name Qayin in Gematria. Source: V.K. 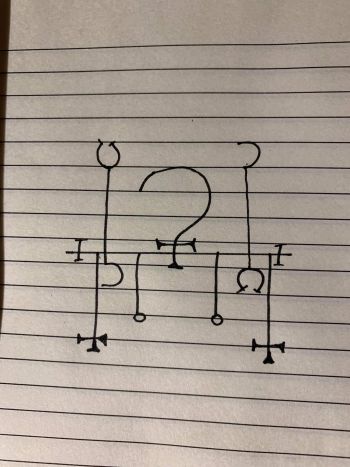 Above: Sigil of Cain’s Earth Aspect Channeled By Augustus Grigori

I have said before that the Qliphothic-Goetic deity Astarte, and that the Venus-attributed deities Inanna, Ishtar, Isis, and Athtar are aspects of the same deity. This postulation is a belief of S. Conolly which is supported by my coven gnosis. A pair of rituals I performed with a partner, performed within the context of Qliphothic demon magick, has engendered both male and female manifestation of Astaroth. My partner in this scenario channeled that 8 was the appropriate magickal number for Astaroth, this being during a working which manifested the male aspect, and this being before we became familiar with the 8-pointed star of Ishtar.

The above paragraph imparts the gnosis of four practitioners (one being a former practitioner), but I will now make a case for Astaroth being Astarte which is based solely on historical fact.

Family 4 of Richard Dukante’s hierarchy of demons includes three different Astaroth demons, being named Astarte, Ashtaroth, and Astarot. Two of these given demons are described as female, while Astarot is described as male. This would indicate that Astaroth is known to oscillate between genders based on authorities in Demonology just as Belphagore is recorded to do. The names Ashtaroth and Astarot are mild corruptions of the original Hebrew Ashtarot, which is the plural form of Ashtoret– I don’t know of any significance to that, as Hebrew plural nouns are often used as names of singular deities (e.g., Behemoth, Niantiel, Gargophias, Elohim), but it’s a fun fact.

The deity known as Athtar, being one of the deities whom Astaroth is either to be identified with or considered an aspect of the same metagod as, was venerated as both genders (some cults of Attar worshiped his masculine aspect, others his female aspect). The male deity Athtar was nothing more than Ishtar’s depiction in southern Arabia. Ishtar was an infamously androgynous goddess herself, often appearing as a bearded woman, and even being referred to as Asdartu (this would be an overtly male variant of the name) in Akkadian literature. Astarte/Asdartu’s sukkal (direct emissary, second-in-command) transitioned from female to male at a given point in the history of Akkadian religion, and the sukkal is always the same gender as the deity.

The name Astaroth comes from Astarte, which is the Greek variant of the name Ishtar (the Goetia is a Greek text, which is why it refers to the Egyptian deity Amen by his Greek name Amon). The cult of Ishtar came to refer to their goddess by the name Inanna.* If the other demons and deities which this article identifies as aspects of the same entity have, in truth, nothing to do with one another, Ishtar and Inanna are certainly still the same. Inanna had both a benevolent aspect and a destroying aspect, which destroying aspect was attributed to Sirius.

The physical description of angels known to most Christians are borrowed from Egypt’s depiction of the bewinged goddess Maat. Wings have a specific meaning in Egyptian theology, and Isis has wings. Athtar’s symbol was the spear point, and Inanna was often depicted grasping a staff made of serpents. According to The Red Goddess, Inanna’s aspect as the storm goddess depicts her riding a dragon. As the Ars Goetia and the modern Qliphothic grimoire Liber Sitra Ahra both depict the demon Astaroth as a “male angel” riding a dragon and carrying both serpent and spear.

It is not unsensible to doubt my claims that the demon Amon really is the same entity as the Egyptian Amen, but claiming that Astaroth and Astarte are not the same deity or aspects of the same deity is simply a step too far. No difference exists between them whatsoever. The Red Goddess makes an undeniable case for the fact that the depiction of Harlot of Revelations in the Bible was entirely based upon Ishtar-Inanna. Keep in mind, the storm spirit Lilitu was referred to as “the Hand of Inanna.”

*Wikipedia says that the cult of Inanna came to know Inanna as Ishtar. I don’t know whether or not this means that Wikipedia and The Red Goddess have contradicted one another.

Unrelated: I was talking with Asmodeus/Aeshma last night. He told me he doesn’t serve Ahriman, which might or might not mean that he never served Ahriman (I didn’t ask). The archangel Auriel (different from Uriel) told me that he used to serve Ahriman as well, stating that that was “a long time ago.” (Note: Auriel has no direct alliance to Jehovah).

Also Unrelated: I always assumed that whatever was signified by the Egyptian theological concept of Maat was inimical to the Satanist until the day I was actually given the definition of Maat during a ritual working to the Goetic demon Amon (I used both his Goetic sigil and his demonic enn for this rite).

Also Unrelated: The myth of Eden comes from Sumerian mythology. Chavvah (the Hebrew form of Eve) originated as a Pagan goddess named Hawwa (or something like that) and Lilith was the storm spirit Lilitu. I don’t know Hawwa, but I can sense that she is not to be slandered. I’m tired of seeing Satanists attempt to interpret the myth of Lilith leaving Eden, because I think it belittles Lilith, and probably Hawwa as well.