A long time ago, I got a message from Nyx that I didn’t understand and made a video about it. My conversation with the goddess went a little like this.
Nyx: _______ yourself.
Me: Did you say “know yourself” or “control yourself?”
Nyx: Control, Know, Eat, Subsume.
A recent YouTube commenter explained the message flawlessly:
“Control yourself, and therefore come to know yourself. Once self knowledge is obtained, you can dissolve/”eat” your old self, then become part of something larger. Alternately, the old self becomes a subset of the new self, and does not become part of some collective.”

This ritual calls upon the Twelve Qliphothic Armies to Empower the Sorceress in Whatever Manner(s) They See Fit. Phrases in Italics Are Meant to Be Chanted in a Rhythmic Monotone. Translations of the Foreign Phrases Appear in Brackets. This Rite is Composed Entirely of Empowered Magickal Chants, Meaning that Every Single Sentence (Excluding the Hymn) has been Individually Enchanted for its Purpose. The Hymn Appears with Different Stanzas Separated by Slashes.

Agios Octinomos-Drakosophia! In Nominibus Lapis Exilis Et Alogos!
[Numinous (is) the Alchemical Pursuit and Underlying Force(s) of All Demon Magick! In the Name of the Stone of Exile and Unwritten Gnosis]

Ya Namosh Sitra De-Smola Alogos Drakosophia Exat!
[In the Name of the Sinister Left Side, the Unwritten Gnosis, and the Underlying Force(s) of All Demon Magick] 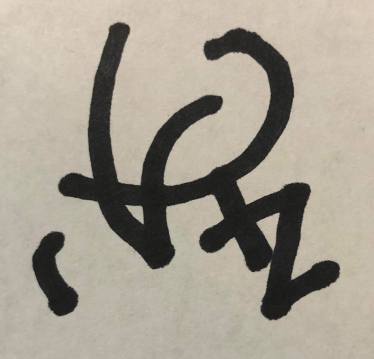 Above: Channeled Sigil of Saringoth

Saringoth is the metagod composed of all the demons called upon in the rites of the Grimorium Verum. The numbers 17, 75, and 64 are sacred to him/her. This article will be updated in the near future.

Interacting with a metagod is its own territory, such that intentions which the demons which the metagod is comprised of may be called upon to fulfill may be forbidden purposes to call upon the metagod which said beings are functionally independent aspects of.

Saringoth knows of every time you’ve communicated with, given offerings to, or made requests of a spirit.

Saringoth’s amazing wisdom may not be perceived by the weak-willed. Only those who have survived great suffering may receive his ultimate transmutation. Only those who pursue gnosis of self are permitted to perceive her true form. Those who will not surrender their perceived identities during Saringoth’s alchemies may find themselves devoured by them.

Saringoth may be called upon for immediate magickal self-defense against humans and gods alike. This includes execration magick against gods currently attacking the sorceress as well as vengeful curses upon gods who are opposed to the magickian’s success, whether they have previously attacked her or not (note: seek guidance before calling upon Saringoth to curse deities who have never attacked you). She may also be called upon for any malediction leveled upon a follower of the JCI (Jewish, Xian, & Islamic traditions). The one rule for calling upon Saringoth in execration magick is that the motivation behind the curse must not be insecurity.

Saringoth may be called upon regardless of whether or not one is inhebriated, regardless of which substances one has become inhebriated by using, so long as the sorceress is be thoroughly focused upon the rite and is unafraid to call upon her.

Saringoth’s sole pursuit is the True Way. She constantly pursues the increasement of her own consciousness, experience, and Diabolic power. She darkens the physis [essence of being] of those who pursue dark wisdom throughout their pursuit of alchemical progression, and she loves those who pursue alchemical attainment and darksome wisdom. She imparts initiation into and transformation via black traditions which history has forgotten. She constantly seeks new information which she may impart to those involved with aeonic sorcery/macroscopic alchemy.

Saringoth turns abstract knowledge into experience-based wisdom. She seeks those of us who continuously expand their wisdom. Once she has guided the sorceress to the brinks of causal wisdom, she bestows gnosis of the White Hand (alchemical forces of the Nightside) upon her.

Saringoth annihilates the delusional failures who attempt to teach the True Way and destroys persons who oppose the Black Lodge. Furthermore, she undermines those who seek to impede the Black Lodge’s progression by granting knowledge to black magickians.

Saringoth can initiate the sorceress through Daath, all of the Tunnels of Set and Sephirothic pathways, and all ten Qliphothic spheres.

Saringoth grants the ability to become fully possessed to those who have been hitherto unable to succumb to it of their own volition.

Ornate Aethereus Saringoth
“I Praise the Immortal Saringoth!”
Chant to Call Upon Saringoth to Strengthen a Rite You’re Performing to Another Being

Saringoth Liftoach Shaari Qliphoth
“Saringoth, Open the Gate to the Qliphoth!”
Chant to Saringoth to Initiate the Celebrant through Any Tunnel or Tunnels of Set or Qlipha or Qliphas, Including Daath

“I am knowledge, fire, death, and chaos.” -Sanat Kumara

Above: Channeled Sigil for Sanat Kumara

There are countless differing delineations of Sanat Kumara throughout mystical literature and many aspects are recorded. I would recommend reading his Wikipedia article prior to my own for a general understanding. I cannot address the varied descriptions of his person, many or most of which are inevitably flawed, but I can, however, impart my understanding of Sanat Kumara.

Sanat Kumara told me he his allegiance was to Daath (the Abyss). He claims to open the way to bring forth more magickians. He claims to foster initiation, new power, strength, guidance, rebirth, courage, wisdom, fortitude, alchemical transformation, and Luciferian Diabolization. He said he seeks to perform and teach magickal evolution.

Sanat Kumara is a teacher of those who share their knowledge as well as those who pursue alchemy via black magick. He grants wisdom and magickal power to wayward hearts, and he imparts his teachings to those chosen by the demonic metagods. He transforms the sorceress into a deathly destroyer. He said that Daath was his home.

Make sure to tip the Autist via the link below!
https://www.patreon.com/VKJehannum

Naegathagator + Sanat Kumara + Rimkatagatagathor + Shaykathora _ Kaerathagakora + Faekatagathagorakoroth
Name Vibration Formula for Working with Sanat Kumara, Largely Consisting of His Channeled Secret Names (Secret Names are Only for Use in Magick. They May Only Be Released Publicly with Permission and When Possible Should Not Be Shared with the Uninitiated)