Moloch is recorded in the Bible as a fertility god whose cult sacrificed babies to him via immolation and expressed their adulation with drums and orgies. Moloch’s representation as a statue depicted him with seven burning-chambers in his bronze form, five of which were filled with animals, one of which was filled with flour, and the last of which was filled with people, all of which/whom would be offered as sacrifices by immolation within the bronze statue. The valley wherein these ceremonies were allegedly practiced became the inspiration for the Abrahamic conception of Gehenna. Mosaic law forbade the participation in these rites under penalty of death, but eventually Solomon himself would come to erect structures in veneration of Moloch.

The Amonites, being the ones who allegedly practiced these things, came to intermix with the Arabians, giving rise to the superstitious bigotry they suffered under. Sixteenth-century demonology saw Moloch become a blame for the disappearance of children under the premise that he devoured them and reveled in the suffering of their mothers. Protestant polemicists made allegations of papal idolatry against the Roman church in the 1550’s, invoking Moloch as a “personification of diabolic and devouring magic” according to texts by Lawson and Kippenburg.

Eliphas Levi has called Molock “the fatality which devours infants” and postulated that the orgiastic rituals of his worship were the precursors of witchcraft Sabbaths, which rituals Moncure Conway inferred venerated Moloch as the Sun as a consumptive force. Now demonized to the point of becoming an archetype and precursor for baneful magick, blood sacrifice, sabbatic witchcraft, and Hell itself, Moloch worship constitutes a black and transgressive Neo-Paganism characterized by brutal execration and harsh alchemical sacraments.

According to what my friends and I have channeled, Moloch’s devotees did not sacrifice children to him in real life, and my research has led me to conclude that there is no archaeological evidence for the Bible’s slander of the deity. The Bible (Ezekiel 20:26) does delineate there being a mass infant sacrifice to Jehovah by the Israelites (as mandated by the god of Abraham), and I feel that the JCI simply projected the horrors of their own faith unto Moloch. 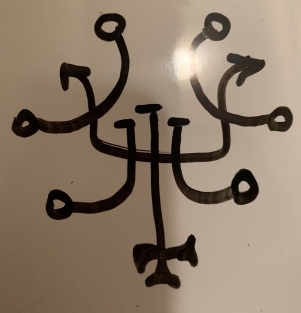 Above: Goetic Sigil of Moloch Channeled By Augustus Grigori

Theistic Satanism describes Moloch as a solar and infernal deity who instills health, power, strength, and nourishment within the magickian– a courageous, theriomorphic warlord who lights his enemies ablaze. Traditional Ahrimanism presents Moloch as a god of blasphemy, polytheism, lust, rage, murder, and death. Luciferian grimoires venerate Moloch as a godform of transformative rebirth and a harbinger of magickal ascent and adepthood.  Khaos-Gnosticism presents Moloch as the guardian of the fiery void– a devouring aspect of the abyss which imparts the final cleansing to the adept. Still other black magickal traditions present him as a cruel and merciless avenger who presides over baleful sorcery– a god of suffering who castigates souls with fire.

Qliphothic demonology portrays Moloch as part of Thaumithan or Thaumitan, the two-part government by Moloch and Satan over Thaumiel, the penultimate Qliphothic realm. It is said that the order of demons which resides therein pursued the addition of a second letter aleph, analog for an English “A,” to their names to increase their power. This narrative is the reason behind the deliberately incorrect transliteration of Azerate into Hebrew as AZRAT, which would properly be spelled AZRT. Where AZRT has a value of 217 in Gematria, AZRAT adds up to 218, the exact value of Moloch’s name. It seems significant, in context of this, that both transliterations of HVHI (Havayoth and Chavajoth) carry two A’s, as do the names Satan and Makal and Malkam, the last being two of Moloch’s names.

Above: My Original Sigil for Moloch

Molock is a god of literature, writing, poetry, wisdom, and knowledge. He is considered to have been chthonic and he can impart intelligence and physical fitness. He rules over alchemy and transforms the witch into whoever she wants to become. He rules combat, war, terror, violence, vengeance, cruelty, the art of street/practical self defense, street fights,  warriorhood, and firearms. He loves anything which glorifies warfare, and he told me to read the Iliad once. He’s a huge fan of the gaming industry, particularly the street fighter type games.

Moloch is the god of fire, whose flames are both purifying and destructive. He can be called forth for prosperity, authority, and respect. He rules all manner of sorcery, divination, protection, and sanguine vampyrism, and he inspires the witch to self-improvement and discipline. Originating as a fertility god, he generally appears with the head of an ox, bull, or cow, and his horns, sometimes said to be a ram’s horns, are said to represent power.  He can modify the astral double with horns which are useful in combat. He rules over the deep sea, and he’s been described as a storm god and a plague bringer as well.

A lord of the Black Flame, Molock is the one who helps the magickian complete the Adamas Ater [Black Diamond] or Lapis Exilis [Stone of Exile], being the variant of the Lapis Philosophicus which is attainable through Qliphothic alchemy. He can  teach one to fortify their astral double against vampyric wraiths.

My take is that Molock is not the same being as Kronos, Melqart, or Ba’al-Hanan. I feel that Melchom is a projection or “avatar” of Moloch.

I asked Molock what ways he influenced the world in. He said that he strives for the creation of overmen through the causation of danger and conflict. He turns people into warriors and soldiers. He works for the creation of new architecture, unique genetic codes, and the rise of people and organizations to power. He wrathfully opposes Jehovah’s influence and breeds demons with Lilith. In general, Adrammelech, whom Moloch is only a little more powerful than, enacts the same agendas as Moloch, save that while Moloch pursues them in a phenotypically physical way, Adrammelech pursues them in a phenotypically spiritual way. Moloch has a strong relationship with Cronos, a relationship, an alliance, based on power.

The image above, which image Rosenberg felt suddenly drawn to create despite a lack of experience with Moloch, is essentially what I saw him manifest as the first time exactly. However, the last few times, he looked different– a black, scaly humanoid with a head and tail reminiscent of a dragon, and still two big horns.

I have produced a list of magickal chants which call upon Moloch here:
Magickal Chants to Moloch – V.K. Jehannum (wordpress.com)

Sources
The Dragon of the Two Flames by Michael W. Ford, The Sacred Magic of Abremelin the Mage Book II, The Greater Key of Solomon Book II, Envisioning Magic by Lawson and Kippenburg, The History of Magic by Eliphas Levi, Demonology and Devil-Lore by Moncure Daniel Conway, The Dictionary of Demons by Michelle Bellenger, Ahriman’s Way by Brian Sharp, Liber HVHI by Michael W. Ford, The Path to Satan by Emperor Nuctulius, The Red Book of Appin, Ketab E-Siyah, The Black Grimoire of Satan by T.J. Dawson, Gematria and the Tanakh by Brian Pivik
http://www.newworldencyclopedia.org/entry/Moloch
http://www.fact-index.com/m/mo/moloch.html
http://www.deliriumsrealm.com/moloch/