Above: Channeled Sigil of Nemicu

“[Nemicu is] a strange entity, powerful but wild. He has much to offer you. He is a gatekeeper in a manner, keeping a transitional flow of black, transformative power that guides black magickians to states of arcane apotheosis.” -Raziel

I do not support the Order of the Nine Angles or associate with persons affiliated with it. Nonetheless, I do have beneficial relationships with many of the entities venerated by the O9A, and introducing these entities to the broader black magickal community has been something of a side-project of mine for some time.

I am writing this article because I believe that Nemicu and other spiritual intelligences venerated by the O9A deserve a better pool of magickians to work with than that which the O9A has to offer. I believe that many members of my audience are or will become better equipped to work with and venerate Nemicu than any “Niner” ever will be.

This article will exclusively feature original methods (chants & sigil) for conjuring Nemicu. My experience is that the magickal current of the O9A causes the spirits they venerate to manifest in ways that are unusual, often undesirable, and generally unpleasant to both the magickian and the spirit.

Ergo, I have channeled a unique sigil for Nemicu and channeled original chants which may be used to summon Nemicu. The chants and sigil which the O9A present for the conjuration of Nemicu do not appear anywhere in this article.

Nemicu echoed Raziel’s description of him when we first spoke, referring to himself as strange, but specifying that he isn’t the most difficult entity to work with. He brings about wild manifestations of Will which could prove the reality of magick to anyone, doing so through methods that many spiritualists find unpredictable. He is a generous and caring spirit who loves and rewards offerings.

Naos referred to Nemicu as the/a “Bringer of Wisdom.” He can teach you just about any magickal tradition you want, though he says he has yet to master them all. In essence, Nemicu is dark, primal, atavistic, necromantic, and abyssal (but not capable of manifesting in the Inbetween). He is not a demon, but rather, he is of the Shaitanic species of djinn.

Nemicu is a good spirit to send to your uninitiated friends to help them get their lives together. One peculiar trait of Nemicu’s is that he empowers the witch when she calls upon him to destroy a given target. He should be sent after your worst enemy, and he will give said enemy the worst he has to offer, and in turn, give you the best that your enemy has to offer.

Nemicu is a close friend of Garmr’s and he is romantically involved with Shugara. He is an ally of Agiel’s and he works closely with Lucifer. He has a powerful and tight-knit relationship with his mother.

The Curse Mark of Nemicu 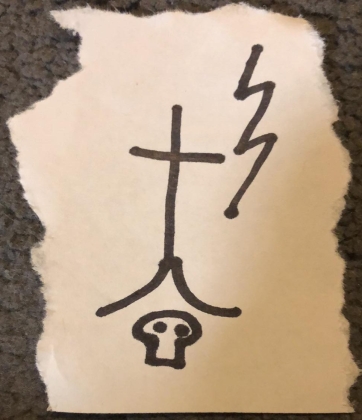 The above symbol was channeled for curse jars. You may simply draw it on a small piece of paper, charge it by focusing malicious intentions into it while chanting the name Nemicu, and put it in the jar. Personally, I don’t charge curse marks for curse jars with bodily fluids, but that’s just a personal preference.