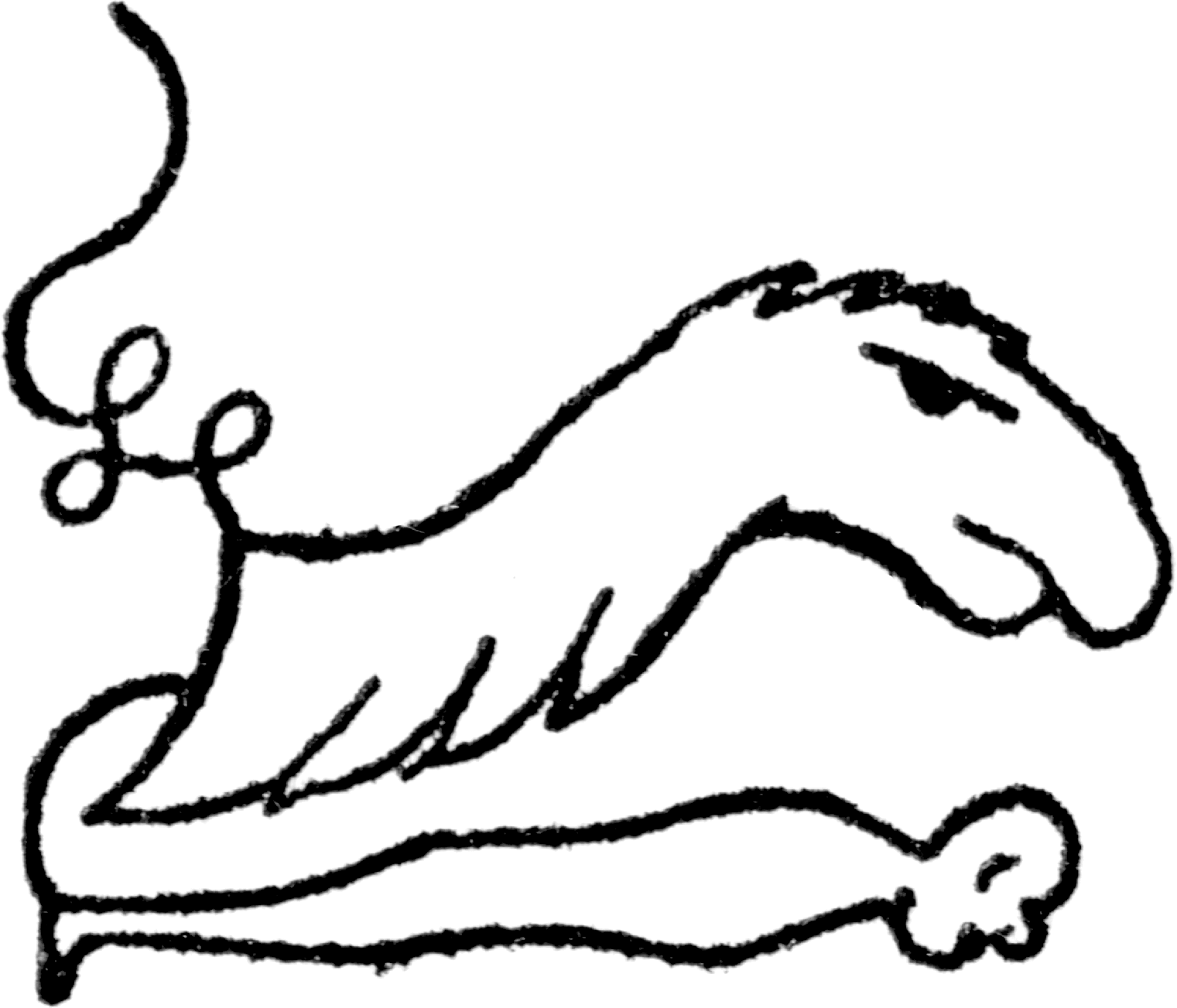 Characith is an archdemon of the Tunnels of Set (the paths between the Qliphothic spheres) who can impart great magickal development to the witch. She manifested to me as female– a succubitic protectress of the Black Lodge who endeavors the furtherance of the demon magick in the West. She can help the witch dominate and control forces which prevent evolution and impart might, blessings, ecstasy, supremacy, and protection unto her.

Characith can start, cultivate, and control the development of wars. Her original sigil, as channeled by Aleister Crowley in Liber 231, depicts a camel-headed entity issuing forth from the feet of a downward-facing mummy. The death of that which is old, insofar as this phenomenon describes an evolutionary/alchemical process, is under the domain of this archdemoness. She rules the power of obsession– especially sexual obsession.

Above: My Original Sigil of Characith

Characith has aptitudes in candle magick, object enchantment, crystal magick, lunar magick, necromancy, and hydromancy. Her teachings and auspices are apt for bone divination as well as skrying (especially with a crystal ball but also with a black mirror). She teaches charm magick and imparts gnosis of various mysteries of demon magick.

Characith can enchant vehicles and prevent the entry of certain things into a building or house. Her auspices and teachings are useful in shielding and warding. She’ll be quite helpful for any matters concerning a haunted house or location– she is particularly useful for such matters. She also presides over mind tricks, glamours, bewitchment, and the evil eye.

Characith can help the witch understand/learn about demonology, mythology, theology, scripture, cosmology, astrology, and astronomy. She’s a matron of astral travel, astral shapeshifting, spoken spell craft, invisibility, and atavism. She can impart bravery, aggression, courage, and bravery to the witch and divest her of risk-aversion and submissiveness. She can protect the witch and teach her to manipulate memory and alter the past.

Characith rules the Qliphothic tunnel branching from Satariel (Saturn/Lucifugus Rofocalus) to Golachab (Mars/Asmoday). This is the eighteenth pathway and its Zodiac sign is Cancer. Herein dwell a demonic collective/demonic species known as the Shichiriron, which name translates to “Black Ones.” This tunnel can be visited via astral projection and meditation journey alike, and the witch can call its energies into her for magickal self-transformation. According to The Shadow Tarot by Linda Falorio:

The need to work with the energies of Characith is signaled by the experience of feelings of abhorrence at the basic formula of this planet— that life must feed upon life. This may manifest as intolerance, and refusal to take responsibility for our base animal instincts and their inevitable outcomes, as well as unrepressed horror at alien life forms and their “noxious” feeding habits, and displeasure at sea-tastes and the smells of vital sexual fluids, with implied disregard for the feminine element in nature, and in oneself.

The entrance to the tunnel of Characith is the Graal, the yoni, the soft pink flesh of the Mother who herein distills her hell-broth of ecstasy and magickal immortality. Shadowed within is a symbol of the God Set, evidence of the identity of the phallus with kteis, of corpora cavernosa/clitoris with prostatic glands/prostate (cf. “Eve’s Secrets: A New Theory of Female Sexuality”). The Ophidian Serpent curls upon the sigil, extending forked tongue to a shimmering drop of the elixir of immortality which has been distilled into the Cup.

Vampires are created of those who linger here to drink, for they too easily become addicted to the pleasures of the pursuance of their dark desires. Draining life to sustain their energy and life beyond its ordinary span, they acquire the power of bewitchment, casting strange enchantments to lure fresh victims to their astral touch. The vampire’s fangs have thus become dread dentata embedded in the luscious touch of pink.

The two red suns represent “the two suns of the upper and lower horizon,@ even as they appear to be the puncture wounds inflicted by the vampire’s abominable nightly habits. Symbolic of the reddened moon, Moon of Blood, Black Sun of Tiphareth drinking the blood of the Goddess, they too are linked with the Magick of the XIo. Subliminal reminders, they engender nostalgia for a long lost planet far beyond our world where there are two moons.

Powers associated with working this tunnel are the abilities to take what one wants, to satisfy one’s needs, to ensure survival at any and all costs. Here may be found boundless energy, creativity, and eternal youth. Working here bestows personal magnetism; there is a fatal sexual attraction which may be turned on as one will choose. Here is the enviable ability to live in the moment, to accept all manifestations of existence as bliss, and lose oneself in mindful ecstasy.