Use the Menu to Navigate & Get Exclusive Content at https://www.patreon.com/VKJehannum

Hebdomadry attributes a different word of power to each planetary sphere it seeks to work with. For example, Saturn’s WoP is Chaos, and one of Luna’s words of power is Nox. The WoP attributed to the sphere of Mars is Azif, and since I was initiating myself into the sphere of Mars via Qliphoth, I decided to add the Martian WoP to the ritual I was writing.

I think the word Azif translates to mean “lawless,” and I didn’t consider it to be any more significant than any other given magickal word. I assumed it had an either ineffable or shallow meaning like most words of power, but in reality, Azif signifies one of the most important concepts in Hebdomadry.

Hostia refers to the word Azif in passing when contrasting that Numinous-Pagan worldview which is (allegedly) our heritage with the Thelema, explaining “The true ethos of the West – which the religion of the Nazarene distorted and supplanted – may be signified by the word `Azif’ and the symbol of the sunwheel; it is pagan in essence. The ethos of the West (which derives from the present Aeonic force or ‘current’ first established c. 500 AD) is not and never has been patriarchal in the sense that Crowley and his followers believed – such a ‘patriarchal’ ethos representing the distortion imposed upon the original ethos by the Nazarenes.”

According to orthodox O9A treatises on cliology, the swastika/sunwheel is the glyph of this current aeon, which aeon is called the Thorian aeon. This refers to Thor, the great warrior who was venerated as a god by Pagans upon his death. The use of the descriptor “Thorian” for the (allegedly) sabotaged aeon implies that the religion which this aeon was supposed to practice was Norse Paganism.

And yes, I think it is specifically Norse Paganism which is of particular importance here. The aeonic significance which the O9A attributes to National Socialist Germany and Adolf Hitler himself seems more coherent if Norse Paganism has a special significance in their cliological narrative.

While most Niners are unaware of this, the O9A does have a legitimate reason to use the German word “opfer” in the place of the English phrase “human sacrifice.” During World War II, many National Socialist officials affixed badges called “opfer runes” to their uniforms to commemorate their comrades who died during the Beer Hall Putsch. If you look up which tarot card Vindex is attributed to, you will find that he is attributed to the card entitled “opfer.” If the name Vindex means “avenger,” what do you suppose (s)he is to avenge?

If the swastika and Azif both denote the Western ethos of honor, warriorhood, and daring, it’s clear what kind of changes the rite of the Martian sphere is intended to cause.

The Christianization of Scandinavia may very well be what Myatt is alluding to when he talks about how Western Paganism was “distorted and supplanted.” While said Christianization was a gradual and nuanced procedure, sometimes boiling down to syncretism, there is a particularly egregious instance wherein Christian missionaries deliberately falsified Norse mythology and persuaded the Pagans that this bastardization was indeed the legitimate mythos. The missionaries presented their “updated” mythos to convince the Pagans that the pantheon which they currently venerated was simply no longer relevant. In doing so, the missionaries dissuaded countless persons from their natural, Pagan ways of life and converted them to Abrahamic orthodoxy. That is to say, Norse mythology was both “distorted and supplanted” in a very literal sense—the authentic Norse tradition is lost to time, which explains why, despite the greatness attributed to Norse Paganism, Myatt doesn’t want the O9A practicing Astaru.

Perhaps the most unacknowledged aspect of Naos is its cursory expeditions into Norse Paganism. I am referring to the appearance of Norse runes with succinct descriptions in the text as well as the diagram of the Tree of Wyrd with various Norse deities placed upon the spheres. To the casual reader, the delineation of Norse runes would appear to serve the purpose of providing the reader with an easy and accessible magickal system for convenient use on the fly. Similarly, the attribution of various Norse gods to the spheres on the ToW would appear to be a tool to help the reader wrap his mind around the schema. However, things may not be that simple.

One of the least discussed and understood staples of the O9A’s iconography is the Cosmic Wheel, which Vilneus Thornian describes as symbolizing warriorhood, “Will”, and the determination necessary to effect macroscopic change. The symbol also foreshadows the “destiny of man” to explore the Cosmos. Thornian refers to the four legs of the Cosmic Wheel as “scythes” in a clear reference to Falcifer. 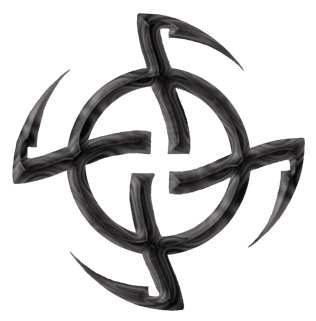 The swastika, in addition to being the glyph of the Thorian aeon in Hebdomadry, is commonly held to symbolize Thor’s hammer, Mjollnir. It seems that whoever designed the Cosmic Wheel deliberately mixed a symbol pertaining to Thor with the Sun Cross which is used to symbolize Odin. 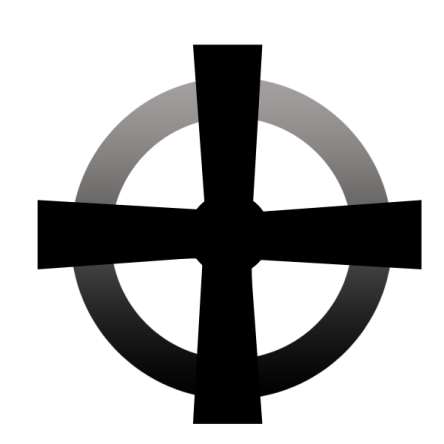 Thor’s hammer, Mjollnir, is purported to be the source of thunder and lightning. As the Cosmic Wheel purportedly symbolizes the “destiny of man”, it is only logical that someone felt the need to combine The Lightning and the Sun.

The Cosmic Wheel therefore has an overtly racialist (pro-Aryan) connotation, which at first, struck me as counterintuitive. Creating a glyph for warriorhood, honor, bravery, and technological innovation within an overtly Aryan-centric frame appears to disparage other races to an unusual extent. I was almost inclined to dismiss this perceived connection, but as Nexion explains, such a harsh racism is in keeping with the weltanschauung which the orthodox O9A literature was written in accordance with. “Essential to the Western ethos, and thus the fulfillment of its wyrd, is the belief in the superiority of its peoples and its civilization. This belief, held by the ‘creative minority’ of all civilizations regarding themselves and their own civilization an essential part of the mechanism of all civilizations, and it alone enables transmission of the élan of the civilization and thus the fulfillment of the magickal Aeon.”

Generally speaking, when orthodox O9A literature discusses what it calls the “Western ethos,” it succinctly describes this ethos as cultured, adventurous, brave, ambitious, etc., but this quote clearly imputes white supremacy to the “true Western ethos” as well, lumping it in with the aforementioned traits. Like the Cosmic Wheel, a seemingly transcendent adoration of strength and innovation is revealed to be code for white supremacy.

Most of the O9A literature which imputes nobility to Adolf Hitler describes the adulation as if it were based on the courage, honor, and the nobility of the man—that is to say, it attempts to argue that Hitler is laudable on the basis of certain commendable traits, rather than racialism. Unfortunately, this appears to have been a jape.

In Nexion’s description of the Nazarene distortion of the Western Aryan ethos, a hidden facet of their so-called “Traditional Satanism” is revealed: “The distortion has changed the Western civilization significantly: from being a pioneering entity, imbued with elitist values and exalting the way of the warrior (and thus enshrining a ‘master-morality’) it has become essentially neurotic, inward-looking and obsessed (and obsessed partly with ‘un-Western’ archetypes). There has been, in short, no Promethean/Luciferian spirit.”

In a footnote, the text elucidates the meaning of the term Promethean: “Here as elsewhere, Promethean is synonymous with `Satanic/sinister.” When the O9A identifies the Western ethos with the Satanic/Promethean, they are identifying Satanism with white supremacy.

If Western means Aryan, then all this discussion of “Western archetypes” refers to a racial collective unconscious. Since the Tree of Wyrd is supposed to be a map of the human psyche, when Myatt allocated Norse divinities throughout the tree in Naos, this was most likely a hint as to who the ToW is made for. According to Nexion, the ONA espouses the “identification with specific Western archetypes and particularly that ‘inspiration/energy/daemon’ which propels fulfillment of Western wyrd (i.e. Imperium),” which wyrd is apparently a policy against colored folk.

Among the correspondences listed for the planet Mars, to which planet Azif is imputed, is the form “blood,” likely signifying heritage. In the footnotes of Nexion, we find a brief discussion about how heritage works: “An individual, by being born within a civilization is psychically linked to the ethos of that civilization (and thus the natural archetypes) if that individual is descended from the folk who created that civilization and maintained it/expanded it. That is, aeonic archetypes are racially-bound.”

So remember, when the O9A espouses “Traditional Satanism” or the “Western ethos”, it is quintessentially trying to groom you for Nationalism (and failing). Myatt wanted to have a whites-only party, but it didn’t work out, because white people don’t like him any more than anyone else does. He delusionally spouts off about honor and the bonds between the folk, but the dude doesn’t have the integrity god gave a serpent. So if honor, loyalty, and nobility really mean anything to you, you should probably avoid good ‘ol Dave.

All I wanted to know was what Azif meant.

The O9A’s Occultism is viable and its founders believe in its power. I make no claims to the contrary. The Sevenfold Way integrates a deep and legitimate understanding of both hardcore Western Occultism and rural druidic Craft. I integrate the O9A’s words of power, divinities, and chants into my magickal system, and I can tell when something doesn’t wok. When E.A. Koetting slips up and posts a shitty magickal chant like his script “To Summon Forth” any entity, I can tell that it’s weak even if I’m accustomed to his chants being strong (and they usually are).

I know the difference. When Skyler Rasmussen sent me his “Sigil of Antinomian Gnosis”  through Facebook messenger after he made it to ask what I thought, I felt could sense its flatness. The symbol was awesome looking and the graphic design of it was impressive, plus multiple known motifs from black magickal iconography were figured in the sigil, I simply wrote back that he needed to make use of it more, because it hadn’t accumulated a significant amount of power yet. He wrote back “finally, someone who can sense that shit,” and explained that he had only meditated on it once or twice (it’s stronger now). Myatt is a real and powerful sorcerer who believes in the merits of sorcery, and most Niners do view magick as an important part of their elitism. This is the trouble with understanding the Order of the Nine Angles: it takes a lot of study to figure out which memes are disingenuous and what purpose is served by advancing them. Shit, most people think Myatt’s a Muslim now– the dude still writes spiritual literature (it’s pretty good, too).

26 thoughts on “The O9A is Inherently White Supremacist”