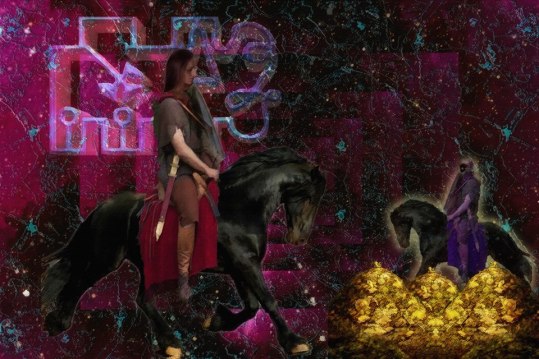 Cimeries is a nocturnal spirit who imparts scholarly erudition and studious diligence, and he teaches grammar, logic, and rhetoric to the witch. He can make the witch brave and leaderlike, and he can also erase the trait of defiance for the sake of defiance. A spirit of strength and structure, he can give the witch the confidence to publicly challenge the mainstream narrative and give refines her character for warriorhood. He is considered a patron of the military, which is fitting, as he bestows courage and confers battlefield heroism. He helps the witch find lost or hidden things. He imparts success in writing and helps in communication and networking.

Cymaries is a marquis with a total of either twenty or thirty legions. The reason that the number of legions varies by source is that the number is reached through name-analysis by Gematria. Ergo, these numbers are more useful for numerological analysis than for actually discerning the number of troops which answer to Cymaries.

Cimeies is apt for the refinement of one’s psychic senses and assisting in the attainment of lucidity within dreams. One of the psychic powers he is most apt for imparting is the ability to intuitively locate locations and people. He appears in a fifteenth-century text called the Munich Handbook of Necromancy under the name Tuvries, and the ability to help people cross seas and rivers quickly is attributed to him therein. According to Rufus, “He can help you to understand and master the pieces, parts, and whole of any system,” and the Dakhma of Angra Mainyu considers him a god of avarice (read: ambition).

His traditional likeness is unto an attractive warrior riding a black horse. High Priest Dann expands upon this delineation, describing Kimaris with straw-berry blonde hair which descends to his shoulders, a muscular figure, and golden wings.