Described as an infernal and serpentine angel and called “the Un-nameable One,” Abaddon is the Angel of the Bottomless Pit. He rules over dark knowledge, poetry, sexual perversion, witchcraft (especially necromancy), medicine, isolation, music, temporal death, life in death, the sun and vampyrism. A great chief of demons and a lord of the abyss, he rules over death and disease. He is one of the four demonic gatekeepers, alongside Amaymon, Azazel, and Beliar. 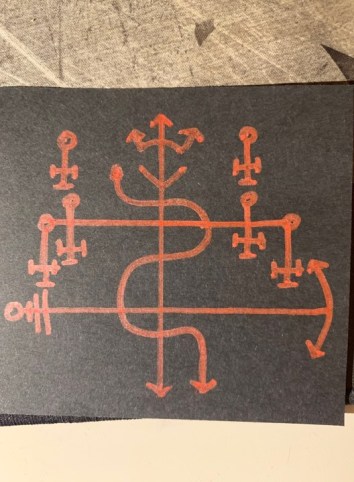 Above: Sigil of Abaddon’s Serpentine Aspect Channeled by Augustus Grigori

The name Abaddon means “Destroyer.” Its trilateral root is ABD, meaning “to perish.” In Gematria, his name has a numerical value of 63, which corresponds to the phrases “the Heart of a Beast” and “the Glory of God” as well as the words “prophet,” “dung,” “fervor,” “builder,” and “Binah’s ‘secret nature.'” Through an alternate method, Abaddon attains the value of 713 via Gematria, equating to “the Sphere of Saturn,” and “return.”

The name “Apollon” is often interpreted as “deprived of multitude,” since pollon means “many” and a- is a negative. His number in Isopsephy is 1461, which relates to the words “foundation” and “matter.”

According to Heinsius, Abaddon is the same being as “the Read Dragon” or “Red Titan,” Pytho/Python/Porphyrion, a dragon which Apollo is said to have killed in other myths after it attacked his mother (Leto/Lytona). Apollo killed Python, “the Demon Dragon,” in order to usurp its ownership of a temple.

Above: My Sigil of Apollo with His Magickal Numbers Written Around It

Called “the Prince of War” and “the most august light of reason,” Abaddon is the chief of the  demons of the seventh hierarchy (Furies) as well as cat demons and grasshoppers. His furies beget frenzy, bloodshed, homicides, frenzy, massacres, and lunacy.

Serving Satan in the office of psychopomp, he holds the key to the Outer Darkness. He is the enemy of Uriel who saw Yeshua (Christ) crucified. According to Abramelin, he is an officer under Amaymon.

Abaddon is simply the incorporation of a previous Greek deity into magickal demonology. In Greek mythology, Apollo, the Lord of the Silver Bow, was venerated in festivals held on the new and dark moon and often given gifts of cinnamon. Described as “shepherd-like in feature” and as very physically attractive, he ruled nature and sat beside Helena on Olympus. He was born on Asteria, the Golden Star Island known as “the earth which floats in the air.” Other myths depict him being born in Hades.

Apollo is one of the few greater deities whom the Greeks called a “daimon.” Apollo is called the “far-striker” or “far-darter” and he is viewed as a god of archery. He guarded a hilltop wherein a certain Sibyl/prophetess integral to Greek mythology dwelled. Apollo, like his sister Artemis, often sent plagues, and was both a “sinister” as well as a “light” deity.

Apollo is the divine image of the principium individuationis and the apparition following the fourth logos, and he acts as an interpreter of dreams and he plays a seven-stringed lyre. He ruled over philosophy, prophecy, healing, magick, destruction, esotericism, and theatre. Apollo is the light of the life of the material world, but not of the soul. He is also purported to be the god of Hyperborea, the second continent whereon the second race was born.

Above: My Sigil for Apollo’s Lycanthropic Aspect

Apollo is related to the sapphire, the metal gold, the plant Laurel, the elements of water and fire, the Far North, as well as the swan, the eagle, and the horse. The number 7 is considered sacred to him, so it’s no wonder Abaddon leads the 7th legion. As the god of the Sun, Apollo is related to the Greek letter Epsilon which means “builder,” just like the aforementioned Hebrew number 63. Epsilon is also purported to symbolize justice, ether, and quintessence.

The Greeks initially associated the planet Mercury with Apollo in the morning and another deity in the evening, and their name for the planet was “Stilbou,” which means “the gleaming one.” Other myths depict Apollo as the father of Asclepios, who rules Mercury. Once this son died at the hands of cyclopes, Apollo avenged him by massacring the one-eyed race.

While he is often purported to have spent his winters in Hyperborea, other sources purport that Apollo appeared as a ravenous wolf before his temple at Delphi during the colder months. This manifestation of his was of a destroying aspect, as was the golden sword he often carried. The name for this aspect is Lyceus, a slaughterous hunter and patron of wolves.

One of the Greeks’ many names for Apollo was “Sauroctonos,” meaning “Lizard Killer,” and it is under this name that Apollo/Abaddon appears in the Septenary Tradition of the Order of the Nine Angles. Sauroctonos rules the 20th pathway which leads from Mars to Saturn (remember that Abaddon was numerically connected to “the Sphere of Saturn”) and he corresponds to the ninth card of the sinister tarot. He is the lord of revelation and isolation who begets intimations of the Abyss. He causes hidden aspects of the self to manifest on the surface and he is depicted as an honorable and immortal warrior who begets psychological and occult evolution. The integration of his energies will beget either knowledge of wyrd (the Will) and insight, or madness and death.

One of Apollo’s names has a numerical value of 371, matching the Greek word for “birth.” His names “Delphian” and “Pythian/Pythius” number to 769, which is equal to the values of the Greek words for will, mind, thought, and feminine. Yet another number counts to 852, equaling “female slave,” “the end,” “the last,” and “thirty.” Another equals 1011, and thus the words four, to change, oppression, pride, communion, intercourse, wide, lukewarm, and the phrase “in three parts.” Looking at a name of his which numbers to 1061, we get an association with the phrase “all-productive.”

I have concluded that Abaddon, Apollo, and Sauroctonos are merely different aspects of the same being. It is possible that Apollo absorbed draconic/serpentine aspects after defeating Python, and that he went on to join the demonic ranks in order to battle Jehovah, and that he attained a demonic aspect as well in doing so. Either way, I am excited to work with this spirit.

Update: Abaddon has made it very clear to me that he is not Python, but that he did devour & integrate the draconic aspect of Python. You probably shouldn’t refer to him as Python.

Sources:
Dagon Rising by Frater Sadashtor, The Greek Qabbalah by Kieran Barry, Satanism Today by James R. Lewis, Encyclopedia of Occultism & Parapsychology by J. Gordon Melton, Ophiolatreia by Unspeakable Press, Magick of the Ancient Gods by Michael W. Ford, Fosforos by Johannes Nefastos, A Manual of Occultism by Sepharial, Diabolicon by Michael Aquino, The Black Grimoire of Satan by T.J. Dawson, Evoking Eternity by E.A. Koetting, Liber Typhon by SaToGa
The Book of Azazel by E.A. Koetting, Sepher Sephiroth by Aleister Crowley and Allan Bennett
The Black Book of the Serpent, Hidden Wisdom by Guy G. Stroumsa, Ascension Magick by Christopher Penczak, Otonen – A Guide to the Stage of Initiate by the Order of the Nine Angles, The Self-Immolation Rite by Hagur, The Goddess Hekate by Stephen Ronan
Thelemic Qabbalah (Volume III) by Frater Apollonius, Practical Planetary Magick by David Rankine & Sorita d’Este, Pomba Gira by Nicholaj de Mattos, The Goddess Baphomet by the Order of the Nine Angles, Greek Magical Papyri Texts or Papyri Graecae Magicae,  Satanic Gnostic Manuscripts by Hagur, Introduction to Magic by Julius Evola, The Birth of Tragedy by Friedrich Nietzsche, Faust by Johann Wolfgang von Goethe, The Witch’s Master Grimorie by Lady Sabrina, The Secret Doctrine by H.P. Blavatsky, Studies in Occultism by H.P. Blavatsky
Volume II of The Sacred Book of Abramelin the Mage, Hermetic Magic by Stephen Flowers, The Dark Gods in the Spheres and Pathworkings by Hagur, Presencing Falcifer by the Temple of THEM